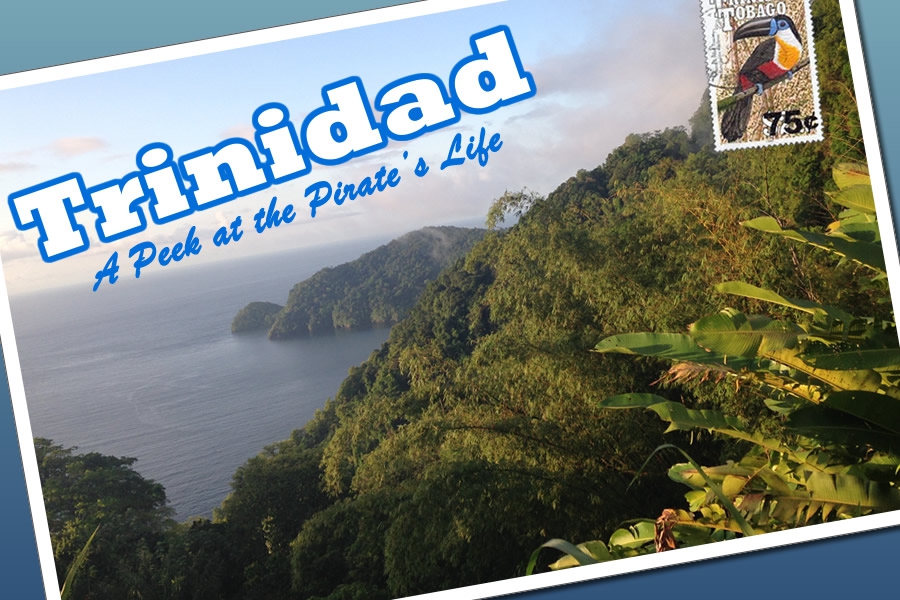 The life of an engineer at Prism Systems is more than desk job, writing code 24/7. The firm's vibrant mix of clients lends opportunities to travel to far-flung locales as Senior Systems Engineer Keith Welch can attest during his 13-year tenure. 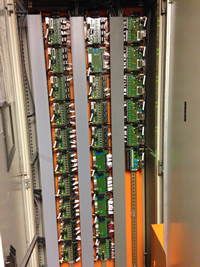 His latest venture involved demolition and reinstallation of the rum distillation line controls at House of Angostura in Port of Spain, Trinidad and Tobago during July and August. House of Angostura boasts a storied history of spirit distillation, dating back to the creation of Angostura® Aromatic Bitters by Johann Siegert in 1824. Its premium products have a worldwide following.

While in the Caribbean, Welch and the other team members went to work on the most aggressive phase of the project, which was to be completed on a short timeline.

Welch described the project in detail: "The second phase...involved the demolition of the control cabinets existing hardware and wiring. Also during demolition, the electricians and engineers had to ensure that each wire was correctly labeled. This was a crucial step because we were reusing the field wiring with the new hardware. One of Prism Systems newly recruited engineers, Michael Robertson P.E., spent weeks before setting foot in the plant creating drawings, and cross-referencing spreadsheets and labels for the thousands of wires that make up this control system."

Welch said Robertson also ordered all the hardware and parts needed for this project, ensuring it made it to the customer site, as well as procured local electricians from TOSL to assist. During that time, Welch said he was 'busy converting the APACS code to Siemens PCS7." 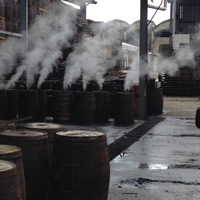 Welch applauded the efforts of Prism colleague Robertson and the collaboration with Angostura team members. "When we arrived onsite we were pleased to meet the Angostura Trinidad team members. They quickly helped us get accustomed to their plant and were always there to help with any problem that came up. Using the plan Mr. Robertson developed, we were able to quickly and efficiently remove all old hardware and install our hardware. While Mr. Robertson and the electricians worked on their part, I reconfigured the redundant servers and all clients with the updated software and programs. The ease of the PCS7 programming was instrumental in Prism Systems' successful completion within the quick time frame given for this project."

However, despite the scope and intensity of the project, they still managed to squeeze in a bit of the local culture, including one drive to Toco Beach, known for its sea turtle sightings. Welch said he was impressed by the friendliness of the people. "Everyone I met was quick to smile and say hello." 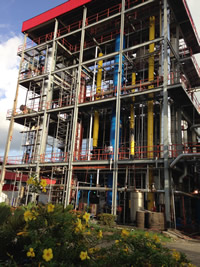 The process of creating rum was also a source of fascination for Welch, whose favorite House of Angostura product was the over-proof Forres Park Puncheon Rum. "One of the things I found interesting is the thickness of the molasses used to make rum. I also found it interesting that molasses is a byproduct from making sugar, which is no longer produced on the island. Therefore it is the most expensive part of the process, since Angostura now has to import all of its molasses."

The greatest adventure while there was the witness of a prison break en route to the embassy – complete with gunfire and hand grenades, Welch said. Fortunately, the project itself was drama free, despite the challenges of island-to-mainland transport and communication. Thanks to the hard work of the Prism and Angostura engineers, Angostura operators and TOSL electricians, Welch said the installation was completed in under three weeks and running at the end of the fourth week – ensuring the production of great rum!

Keith Welch and Michael Robertson sampling the fruits of their labor. 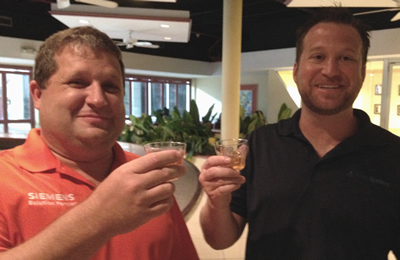