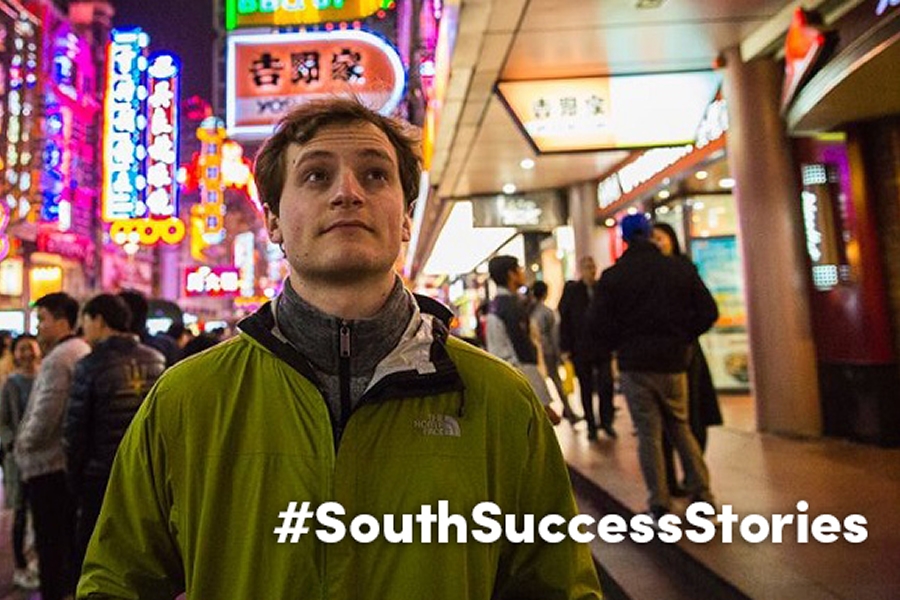 Drew Yates' College of Engineering degree from USA has become his ticket to see the world. Here, he's taking in the sights of Shanghai, China, where he and his co-workers from Prism Systems, Inc., were developing software for a theme park.
09 February 2017 Published in News

Rate this item
(1 Vote)
Be the first to comment!

It began for Drew Yates with a last-minute decision. And now he's in China, making sure thrill rides do what they're supposed to do.

Drew Yates, College of Engineering Class of 2014, grew up playing video games. Like probably a lot of gamers, he thought it would be cool one day to have a job designing video games. That was probably somewhere in the back of his mind seven years ago when he first enrolled for classes at the University of South Alabama. But he needed some direction.

"I was sitting in freshman orientation with my twin brother, wearing an Arts & Sciences 'Undecided' tag. The big projector started going through all of the colleges — nursing, education, business, etc., — and then they got to the engineering slide. I turned to my brother and said 'I think I want to try that.' He didn’t believe me, but I got up and went to the engineering bus. The guy there thought I was lost because my name badge was still Arts & Sciences, but I told him that I had just made up my mind."

Once inside, he read about the various engineering disciplines, and saw one that connected him to his video games. "I saw 'computer' engineering, and I played a lot of video games at the time — and still do — and always wondered how computers worked so hard to output the games that I played so much." He took the next step and chose computer engineering for his major, but Yates still had his doubts.

"The plan really was to try computer engineering, probably not do well, and then change to mechanical engineering, because I love airplanes. But after I went to my first computer programming class and I got a computer to say 'Hello World' to me, I was hooked." By the end of the year, he had developed a program to calculate what grades he needed on his finals so he could maintain an 'A' average in his classes.

Yates looks back now and smiles at the educational path he took at South.

"Most engineers I run into nowadays talk about how they’ve wanted to be an engineer all their life, or because their parents were engineers," Yates said. "Quite frankly, I had no idea what an engineer did before I started taking classes in the major! I began with the intent to make video games. After I got more into engineering and I was taught that I could make a lot bigger change in the world than video games, I decided that I had no idea what I wanted to do and I would figure it out when the time came."

Notice his remark about "the world." This Baker High School grad, captain of his high school soccer team, who came to South "because they gave me the best scholarship," eternally grateful to engineering professors Dr. Samuel Russ and Dr. Thomas Thomas because "they know how the real world works," with two siblings who are also South graduates, was not going to embrace the relative comfort and security of staying close to home. He wanted to see the world, even though he didn't know exactly what he was looking for.

Enter Prism Systems, a Mobile-based systems engineering firm with clients worldwide and an interest in South graduates such as Yates, who started at Prism Systems full-time after a one-year internship.

"Drew has been well prepared at South," Todd Hassel, business development manager, said. "He has represented both his alma mater and Prism Systems very well in a short time since graduation. He may have a lot to say about being ‘challenged’ at Prism Systems, Inc.," Hassel laughed. And indeed, he does.

"They’ve given me insane projects that I thought I would never be able to handle by myself, but the amount of help they provided me has been phenomenal," Yates said. "I’ve been able to design and program control systems, and software packages for chemical plants, by myself!

"Last year I gave a technical presentation in Las Vegas at a Siemens conference to a bunch of people who were double or triple my age, and who have had 10-11 times more experience than me. It was a great experience, and I am so happy with Prism for giving me this opportunity."

It was the work at Prism that has brought together his two passions: entertainment and world travel.

Prism Systems was developing software for theme parks in Paris, Shanghai and Hong Kong. When given the chance to work on one of these projects, Yates jumped at the opportunity. He spent time in Japan testing software at a ride vendor and then an extended stay in both in Shanghai and Hong Kong testing software for different rides at the theme parks. For a short period, Yates was even hired by the Walt Disney Company as an employee.

"We test every part of the system imaginable. For the attraction in Hong Kong, it took a team of engineers months to test the entire system. This is to make sure that the software conforms to the design and performs as expected."

The experience has taken this gamer to an entirely new level of gaming. "It’s much more exhilarating controlling something in real life than in the virtual world. Now, when I program something it can move some massive mechanical structure, instead of moving pictures on the screen of a computer. The stakes are higher, but the rewarding feeling when you’re controlling something that complicated and interesting in real life is something that’s out of this world for me."

If you're under the impression that Drew Yates is having the time of his life, you'd be right.

"I fully believe in the saying that if you love your job, you’ll never have to work a day in your life. That’s the only thing I wanted out of my career, and I have it. Life is too short to live with a boring job, it’s too short to have a job that doesn’t challenge you, and it’s definitely way too short to be unhappy with your job. I want to be happy, and see the entire world, because we’re living on something beautiful, and when I can get paid to do that while doing something I love doing, it makes for a great time."