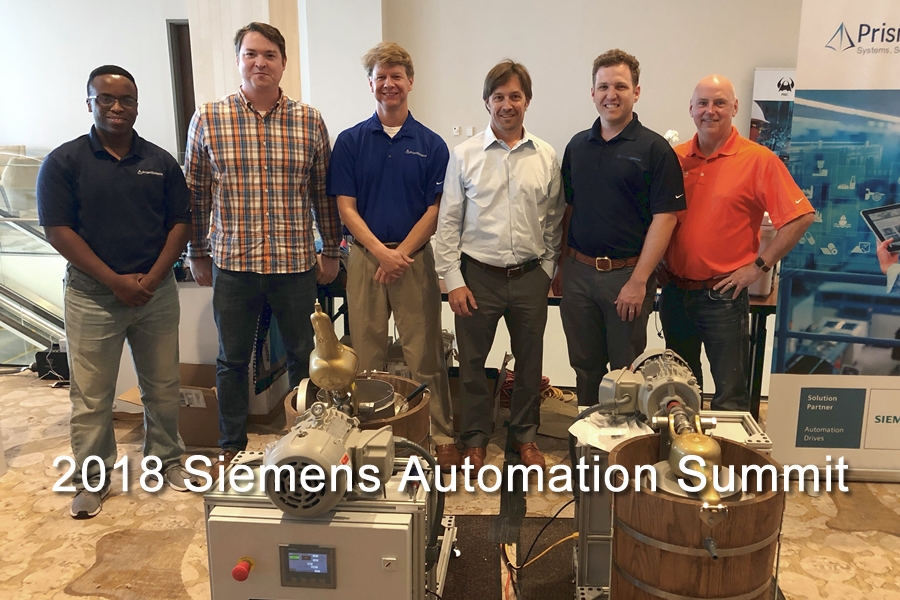 Siemens Summit - MindSphere with a serving of Ice Cream

The 2018 Siemens Automation Summit was hosted by the Siemens Solution Partners in Marco Island, Florida on June 25-28. Like always, the Summit included an energetic exchange of ideas, intriguing product demonstrations, and interactive fun.

For this year’s Summit, Prism Systems constructed two ice cream makers showcasing the capabilities of Siemens solutions. The machines were fully manufactured in-house and displayed at the Solution Partners booth where Summit guests were served delicious, homemade vanilla ice cream. Toppings were provided along with root beer to make root beer floats! Many had seconds, and thirds…daily!

The two ice cream machines, built with Siemens industrial motors and variable frequency drives, were controlled with Siemens latest PLC while connecting to the cloud via MindSphere, an open cloud platform from Siemens for applications in the context of the Internet of Things (IoT). The “third” ice cream machine was virtual and served as a digital twin. The digital twin is the epitome of the digitalization of plants and machinery – the virtual copy of a real machine or system. The digital twin, running Siemens NX Software, was animated and mimicked the real machines in a virtual environment. The visualization featured a large TV displaying the MindSphere webpage and the digital twin in split screen mode.

Raj Batra, President of Siemens Digital Factory, stopped to chat with Todd Hassel, Prism’s Business Development Manager, in order to learn more about the ice cream machine. Todd described how the machines were created. “We needed a simple concept to demonstrate a pile of Siemens technology including MindSphere and Digital Twin. Everyone can understand the process of making ice cream. We started with the mechanical backbone designing our machines, and then made them smart. Finally, we wanted to utilize Siemens standard industrial hardware and make each of them run off of a standard wall plug.”

With Siemens cloud (MindSphere) centralizing the data, the ice cream machine’s operation is easily assessable. Guests were able to access a URL and browse a webpage displaying the following ice cream data:

Siemens Solution Partners contributed to the funding of the project and worked shifts serving ice cream and operating both machines. Operation of the ice cream machines was simple and intuitive. First, all ingredients were loaded in the five-gallon mix bucket and loaded into the barrel on the machine. The barrel was then filled with ice and rock salt. By simply pressing START on the HMI touch screen, the machine will run until the ice cream thickens and the motor stops at a programmed torque setpoint or the batch time setpoint is reached. Each batch took about 26 minutes.

The homemade ice cream was extremely popular in the Marco Island summer heat and served as a great technical conversation starter! Discussion of the Siemens MindSphere and Digital Twin solutions was much easier when demonstrating the simple process of making ice cream and then enjoying the dessert.